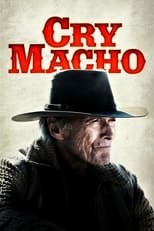 Director Clint Eastwood CastClint Eastwood, Eduardo Minett & Natalia TravenRelease Sep 17th, 2021 Synopsis Based on the book of the same name, Cry Macho centers around a retired rodeo star. Failing to live up to being a horse breeder in the late 1970s, he’s asked of a favor by his former boss. The former star is tasked with bringing home his boss’s son from Mexico. However, he may not be ready to try to convince such a troubled young man to give up his life on the streets. The dissection of what it means to be a man may just be the key to their road trip. Clint Eastwood directs and stars in this neo-western alongside Dwight Yoakam. Cry Macho is directed by Clint Eastwood and was released on Sep 17th, 2021.

Where can you stream Cry Macho: Not yet streaming online