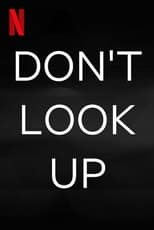 Director Adam McKay CastLeonardo DiCaprio, Jennifer Lawrence & Meryl StreepRelease TBA Two low-level astronomers, upon discovering that a meteor will strike the Earth in six months, go on a media tour to try to warn the world but find an unreceptive and unbelieving populace.
Don’t Look Up is directed by Adam McKay and will premiere on TBA.

Where can you stream Don’t Look Up: Not yet streaming online