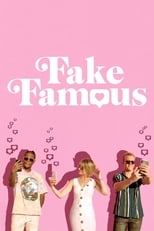 Director Nick Bilton Cast, & Release Feb 2nd, 2021 Explores the meaning of fame and influence in the digital age through an innovative social experiment. Following three Los Angeles-based people with relatively small followings, the film explores the attempts made to turn them into famous influencers by purchasing fake followers and bots to “engage” with their social media accounts.
Fake Famous is directed by Nick Bilton and was released on Feb 2nd, 2021.

Where can you stream Fake Famous: Not yet streaming online DVD/Bluray via Amazon