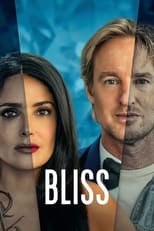 Director Mike Cahill CastSalma Hayek, Owen Wilson & Madeline ZimaRelease Feb 5th, 2021 A mind-bending love story following Greg who, after recently being divorced and then fired, meets the mysterious Isabel, a woman living on the streets and convinced that the polluted, broken world around them is just a computer simulation. Doubtful at first, Greg eventually discovers there may be some truth to Isabel’s wild conspiracy.
Bliss is directed by Mike Cahill and was released on Feb 5th, 2021.

Where can you stream Bliss: '