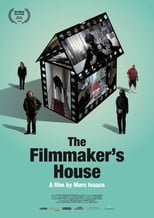 Director Marc Isaacs Cast, & Release Oct 17th, 2020 When the Filmmaker is told his next film must be about crime, sex or celebrity to get funded, he takes matters into his own hands and begins shooting in his home with a cast of characters connected to his own life. We first meet two English builders, employed to replace the garden fence, temporarily removing the barrier between the house and a Pakistani neighbour. This introduces the film’s...
The Filmmaker’s House is directed by Marc Isaacs and was released on Oct 17th, 2020.

Where can you stream The Filmmaker’s House: Not yet streaming online