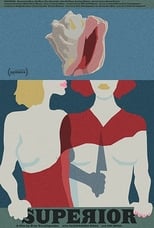 Director Erin Vassilopoulos CastAlessandra Mesa, Anamari Mesa & Pico AlexanderRelease Jan 30th, 2021 On the run, Marian returns to her hometown in upstate New York to hide out with her estranged identical twin sister, Vivian. Struggling to put the past behind her, Marian lies about the reason for her return, leaving her sister in the dark until their two worlds begin to collide.
Superior is directed by Erin Vassilopoulos and was released on Jan 30th, 2021.

Where can you stream Superior: Not yet streaming online