The Year of Fury 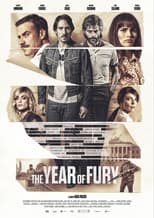 Director Rafa Russo CastJoaquín Furriel, Alberto Ammann & Daniel GraoRelease May 28th, 2021 Uruguay (1972) unavoidably falls into a terrible dictatorship. Diego and Leonardo, two writers of a well-known TV comedy show, struggle to maintain their integrity under the pressure they receive to tone down their political satires against the military. On the side of the oppressors, Rojas, the lieutenant in charge of torturing subversive youth, finds emotional refuge in Susana, a prostitute....
The Year of Fury is directed by Rafa Russo and was released on May 28th, 2021.

Where can you stream The Year of Fury: Not yet streaming online