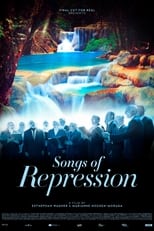 Director Marianne Hougen-Moraga, Estephan Wagner Cast, & Release Oct 21st, 2021 At the foot of the Andes Mountains in Chile lies an idyllic German colony called Villa Baviera. However, the beauty of the place – formerly known as Colonia Dignidad – hides a grim past. Systematic child-abuse, medical experiments, torture chambers and mass graves are part of its history. Today, 120 inhabitants still live their lives in the colony which has since changed its name to Villa...
Songs of Repression is directed by Marianne Hougen-Moraga, Estephan Wagner and was released on Oct 21st, 2021.

Where can you stream Songs of Repression: Not yet streaming online