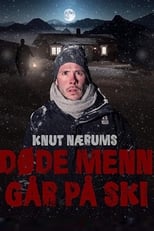 Director Daniel Anda, Ruben Anda CastHåkon Smeby, Ingar Helge Gimle & Mads Sjøgård PettersenRelease Mar 1st, 2022 During the easter weekend murder fanatic, playboy and millionare Sverre Hartkorn invites up his seven closest friends to the desolated Blåkamhytta for a murder mystery. The person who solves the mystery by easter day at 9pm wins 5 million nok. It is also said that the murderer Ulvar Mørkli haunts the cabin and after just one day, the easter peace that once was is gone. One of the participants is...
Døde menn går på ski is directed by Daniel Anda, Ruben Anda and was released on Mar 1st, 2022.

Where can you stream Døde menn går på ski: Not yet streaming online