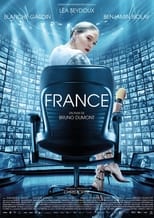 Director Bruno Dumont CastLéa Seydoux, Blanche Gardin & Benoît MagimelRelease Aug 25th, 2021 Paris, today. France de Meurs is a star journalist running between a television set, a distant war and the hustle and bustle of her busy family life. Her frantic high-profile world is suddenly turned upside down after a traffic accident in which she injures a pedestrian. This unexpected irruption of reality calls everything into question. As France attempts to slow down and retreat into a simple...
France is directed by Bruno Dumont and was released on Aug 25th, 2021.

Where can you stream France: Not yet streaming online