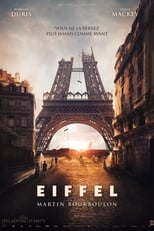 Director Martin Bourboulon CastEmma Mackey, Romain Duris & Pierre DeladonchampsRelease May 19th, 2021 The government is asking Eiffel to design something spectacular for the 1889 Paris World Fair, but Eiffel simply wants to design the subway. Suddenly, everything changes when Eiffel crosses paths with a mysterious woman from his past.
Eiffel is directed by Martin Bourboulon and was released on May 19th, 2021.

Where can you stream Eiffel: Not yet streaming online