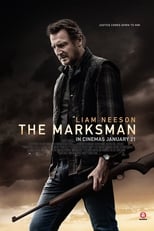 Director N/A CastLiam Neeson, Katheryn Winnick & Teresa RuizRelease Jan 15th, 2021 Jim Hanson’s quiet life is suddenly disturbed by two people crossing the US/Mexico border – a woman and her young son – desperate to flee a Mexican cartel. After a shootout leaves the mother dead, Jim becomes the boy’s reluctant defender. He embraces his role as Miguel’s protector and will stop at nothing to get him to safety, as they go on the run from the relentless assassins.
The Marksman is directed by N/A and was released on Jan 15th, 2021.

Where can you stream The Marksman: Not yet streaming online