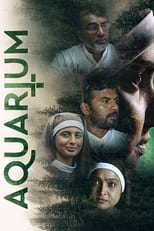 Director Deepesh T Cast, & Release Apr 10th, 2022 A Convent in a scenic high range.A rugged mother superior of the convent.The inmates,Sister Elsitta and Sister Jaseentha, perceive Jesus Christ in two ideological extremes.The abrasion of fantasy and reality augments the contention between them.The clergy are the only male intervention in their life.
AQUARIUM is directed by Deepesh T and was released on Apr 10th, 2022.

Where can you stream AQUARIUM: Not yet streaming online