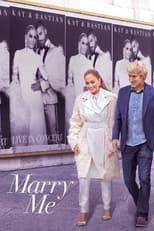 Director Kat Coiro CastJennifer Lopez, Maluma & Owen WilsonRelease Feb 11th, 2022 Music superstars Kat Valdez and Bastian are getting married before a global audience of fans. But when Kat learns, seconds before her vows, that Bastian has been unfaithful, she decides to marry Charlie, a stranger in the crowd, instead.
Marry Me is directed by Kat Coiro and was released on Feb 11th, 2022.

Where can you stream Marry Me: Not yet streaming online DVD/Bluray via Amazon