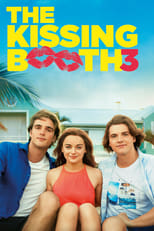 Director Vince Marcello CastJoey King, Jacob Elordi & Joel CourtneyRelease Aug 11th, 2021 It’s the summer before Elle heads to college, and she has a secret decision to make. Elle has been accepted into Harvard, where boyfriend Noah is matriculating, and also Berkeley, where her BFF Lee is headed and has to decide if she should stay or not.
The Kissing Booth 3 is directed by Vince Marcello and was released on Aug 11th, 2021.

Where can you stream The Kissing Booth 3: