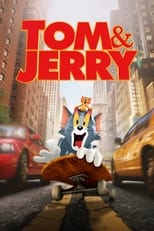 Director Tim Story CastWilliam Hanna, Mel Blanc & Chloë Grace MoretzRelease Feb 26th, 2021 Tom the cat and Jerry the mouse get kicked out of their home and relocate to a fancy New York hotel, where a scrappy employee named Kayla will lose her job if she can’t evict Jerry before a high-class wedding at the hotel. Her solution? Hiring Tom to get rid of the pesky mouse.
Tom & Jerry is directed by Tim Story and was released on Feb 26th, 2021.

Where can you stream Tom & Jerry: