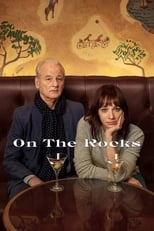 Director Sofia Coppola CastRashida Jones, Bill Murray & Marlon WayansRelease Oct 23rd, 2020 Faced with sudden doubts about her marriage, a young New York mother teams up with her larger-than-life playboy father to tail her husband.
On the Rocks is directed by Sofia Coppola and was released on Oct 23rd, 2020.

Where can you stream On the Rocks: