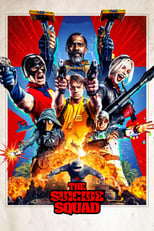 Director James Gunn CastMargot Robbie, Idris Elba & John CenaRelease Aug 6th, 2021 Task Force X - aka the Suicide Squad - is dropped on the remote, enemy-infused island of Corto Maltese to find and destroy Jotunheim, a Nazi-era prison and laboratory.
The Suicide Squad is directed by James Gunn and will premiere on Aug 6th, 2021.

Where can you stream The Suicide Squad: Not yet streaming online