2021, 2020, 2019 & the 2010's best rated Argentine TV series out on DVD, Bluray or streaming on VOD (Netflix, Amazon Prime & Hulu).
Yes, Argentina brought some quality television series. You might not know them, but shows like Epitafios (2004) and Terra Ribelle (2010) have shown us that Argentinian television is well worth a try. Below, our pick of the best ones until now.
PreviousPreviousNextNext 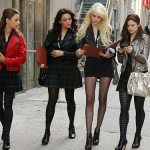