You may have heard of Sam Fuller’s 1982 movie White Dog, in which a vicious German Shepherd is trained to attack dark-skinned people. Its gloomy, metaphorical take on racism was met with mixed reception and perceived ambiguity whether the racism in the film was actually criticized or celebrated by the author. This year’s winner of Un Certain Regard prize at the Cannes Film Festival comes from Hungary and it can certainly be regarded as a thematic homage to Fuller’s cult classic. Labeled one of the leading figures of the Hungarian new wave cinema, Kornél Mundruczó presents his fifth feature film, which is a surprisingly refreshing take on otherness and exclusion in society. Casted in the shape of a modern day fable in an urban, middle class environment, White God explores sensitive and important subjects in a very original manner.

In her big screen debut, Zsófia Psotta plays 13 year-old Lili, a noticeably lonely child of divorced parents whose primary source of joy in life is her Labrador crossbreed called Hagen. Due to her mother’s months long work obligations abroad, Lili has to stay with her tormented and grumpy father (played by renowned Hungarian stage director and actor Sándor Zsótér) who is struggling with his own frustrations and is not particularly fond of Lili’s dog. After a quarrel has escalated between father and daughter, Hagen is thrown out on the street, left to his own devices in a fight for survival together with other unwanted stray dogs on the outskirts of Budapest. From that point on we follow the storylines of Lili and Hagen simultaneously, on their path to the seemingly inevitable reunification. Much like in Fuller’s film, the dog’s naive purity and goodness is killed off by cruelty of dog dealers and brokers of illegal dog fights who use Hagen for their own goals.

What starts off as a coming-of-age, girl-and-her-dog-film turns gradually in an apocalyptic revenge movie, where the underprivileged and socially excluded start an uprising that is reminiscent of the toppling of master-slave dynamics in Planet of the Apes. Evoking John Carpenter’s post-apocalyptic films with a heavy political undertone, the concept of modern civilisation time and time again turns out to be merely a fabricated societal construct in this film – virtually all the humans are egocentric, vicious and mean, including the children to various extents. Much like Hagen is forcefully trained to be a vicious killing machine, we are conditioned to act in such a mean way to each other and especially towards the outcasts and minorities. Even though the original human (and canine) condition is one of innocence and kindness, it is suggested that we are forced into viciousness, and in the context of a modern society violence will become the ultimate and inevitable resort of action for the oppressed groups in attempts of taking their rightful place within the community.

Technically brilliant, with quite a high level of suspense and an exceptional sense of timing, White God never offers a dull moment. But despite all the visual brilliance, Mundruczó’s focus is primarily on the philosophical exploration of the film’s main theme. Through metaphors and hints to current affairs in Hungary and Europe in general, White God’s cinematic social commentary is obvious and relevant. The second part of the film offers some more surreal and even comic elements which, albeit sometimes far fetched, work quite well within the general thematical disposition of the film. In the wake of 2011 London riots, philosopher Slavoj Zizek has suggested that we live in a social space which is increasingly experienced as “worldless”: in such a space, the only form protest can take is meaningless violence. But White God argues that if we only manage to play music to each other (as an antidote to the language of exploitation, shouting and commanding) and try to level and cooperate (instead of setting up clear hierarchical structures), there will be hope of overcoming this woldlessness. Ultimately, the allegory about humans and dogs is clearly about races, the concept of the ‘other’ and power relations in society.

All acting performances are highly convincing, and if there was ever a prize given in the category for the best supporting role by an animal, we would have a clear-cut winner in the dogs of White God. The plot develops neatly and Mundruczó looks largely in control of his story, bar a few jaunts into subplots which seem slightly forced and redundant. The final sequence leaves the audience wondering about the director’s proposed solution and the possibility of a real catharsis that may lead to peaceful coexistence between former oppressors and the oppressed. The questions of social equality and hierarchy are evoked on a deeper level; when fearing for our lives it may be quite possible to fake a commitment to equality. It is ultimately in the eye of the beholder whether Mundruczó’s message is interpreted as an optimistic or a pessimistic one. A quirky detail in the movie is a scene where one of the dog dealer crooks is wearing a faux shirt of Sarajevo Football Club, most probably courtesy of Mundruczó’s personal wardrobe given his long standing close relationship with the city of Sarajevo and its annual film festival. Apart from the abundance of slightly irritating, shaky handheld camera shots, all the scenes featuring dogs are nothing short of fantastic. With its wonderfully suggestive title and original cinematic approach of a delicate subject, White God is definitely one of the most impressive European films of the year. 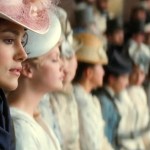