This list comprises the best mumblecore films of 2013 and before, and looks at interesting films to come in 2014 of this rather young American independent genre.

Mumblecore is a term that gets thrown around a lot these days, some people feel offended by it, some probably use it to draw attention. Although I am against categorization, it is the only way to get an overview on things, especially on historical happenings. That is the reason why mumblecore is easy to define as that 21st century American independent group of young people that mostly turned on the digital and cheaper way of filmmaking to show off their luxury bourgeois existential problems. Although some of them went a little more mainstream and higher in budget, getting famous actors like the Duplass brothers, going horror like Joe Swanberg, transferring to a popular format like TV series as Lena Dunham’s Girls or working with more experienced directors like Gerwig’s coöperation with Baumbach, I tried to keep track of all those filmmakers by putting them under the mumblecore tree. Their evolution as artists makes the classification questionable but I feel these films remain a perfect image of the (spoiled) Western ‘hipster’ generation and their difficulties in dealing with the responsibility of human relationships. Even though I took this new indie wave very broadly, which makes every choice on this list discussable, the list makes sense and expresses a general and recognizable feeling of alienation. Every dream the 20th century stood and strived for, seemed to be extremely naïve, since it has fallen to pieces many times.

In the end, my main purpose is just to get really good but lesser known films into the spotlight.

Suzanne, a successful real estate broker, is happily married to a weatherman but suddenly he passes away. We follow her through lonely christmas festivities while the film gets a tasty dark tragicomical overtone. In the same way her life spins into a mess, the film confuses too much to last entertaining until the end. This could be so much better, still an interesting watch.

Karpovsky clearly likes Woody Allen a lot, which I can only support. Alex plays a neurotic man who tries to tour and market his movie all over the States. Next to that we see how he copes with his company of friends and lovers. I liked his view on the difficulties of being a filmmaker, quite a regular metafiction ‘cinéma vérité’ style subject in mumblecore movies, but his female relationships were a little bit too clichéd. In fact, I hated his co-actors, but maybe that is because they pull off a really believable portrayal of annoying and overdemanding friends. Onur Tukel’s character represents a typical tiring friend you do not want to have. I am certainly looking forward to seeing more of this director.

Amy Seimetz is already a regular in the mumblecore scene, this year she also played as an actress in the widely overrated, empty but beautiful in a Malick way, Upstream Color (Carruth, 2013). Although Sun Don’t Shine shares the same look, it does not replicate its pretentiousness of being complex. The promising Kate Lyn Sheil (The Color Wheel, 2011 and The Comedy, 2012) and filmmaker Kentucker Audley (Open Five I & II, 2012) give believable performances of two emotional labile characters. The result is an estranging and thrilling road-trip where the financial restrictions did not break down any power of the film. It reminded me of Wingard’s impressive use of low budget effects in the ‘mumblegore’ Popskull (2007).

Again, Karpovsky plays a filmmaker but this movie goes more deeply into the producing process. The story features two buddy editors, having some everyday quarrels in the meantime. Tarik Lowe (the other main actor) wrote the script together with Danny Schechter who based a lot of the story on real life experiences. Mumblecore artists tend often to translate their lives up on to the screen because it is much easier filming something you know a lot of. That way they succeed in giving interesting insights on human relationships. But at the same time Mumblecore get accused being socially ignorant because of that ‘restriction’.

Life goes so fast, we sometimes forget to think of the other. This superdry and unique movie gives a superficial but realist view on how we as rational human beings, do not connect to each other at all. It also sees humor in the big troubles of life like sickness and death, in the way Todd Solondz would do. Simultaneous, as a whole the film, it seems upbeat and colorful like a Wes Anderson movie, confusing a lot of people when they watch it too seriously. In the end, the film is meant as funny as the deadpan and hilarious Bananas (1971) of Woody Allen, an influence on Byington’s work.

Andrew Bujalski pretends to break free from his mumblecore slack by issuing a Lynchean tale out of the eighties about proto computer geeks who try to beat a chess computer. But in the end the film deals with the same existential problems as the rest on this list. The story goes insane and expresses Bujalski’s ‘looping’ drugs experiences. The chess between human and computer represents the clash between analogue and digital. It seems like a indirect reference to the digital revolution mumblecore it is part of.

Shelton knows how to let people seem very spontaneously. She delivers a certain subtlety that makes you caring and laughing naturally about her protagonists. Shelton has the ability to make extraordinary situations come naturally like having sex with Your Sister’s Sister (2011), having hetero sex with your best friend of the same sex on Humpday (2009) and hunting cougars with friends in some forest in My Effortless Brilliance (2008). Although Touchy Feely (2013) is her weakest film to date, it still is quite enjoyable. And why do I not have friends who make calzones for me?

Swanberg cleans up his act and puts some commercial faces in a more conventional but still heavily ‘mumbly’ story about a couple of friends drinking beer and challenging the boundaries of interchangeable relationships. No wonder Bob & Carol & Ted & Alice (Mazursky, 1969) was Swanberg’s favorite movie at the time. Despite it’s forcing into mainstream, the film has got some brilliantly recognizable situations. And hey, it was one of Tarantino’s favorite movies this year. Which director would not want that honour?

I feel this movie is Swanberg’s genuine contribution of the year to art cinema. And he delivers a wonderful little movie, just showing the life, day by day of a mature woman, hosting friends and her niece, surfing at the beach, drinking green smoothies, etc. Swanberg tends to like building a film around one of his acquaintances. Like in Uncle Kent (2011), the main character, here actress Jane Adams seems to act out a close version of herself which results in a fantastic performance.

Looking forward to his next projects Happy Christmas and 24 Exposures, both to release in 2014.

Frances Ha (2012) is mumblecore’s masterpiece. Noah Baumbach stole mumblecore’s spirit and leading lady to make his magnum opus. The main protagonist, Greta Gerwig, is lost in her life, she has dreams but has to work as a waitress, her best friend leaves her for a boyfriend she does not like. We follow her on a journey through the hypocrisy and loneliness our society represents.

This film feels like an ode to our generation, frequently looked upon as some decadent, spoiled, narcissistic and superficial hipsters. But we are just some bad-ass eclectic ironic and existentialistic motherfuckers who have a clearer view on the depressiveness and absurdness of life. That because we are the offspring of the Western ‘welfare state’, mostly based on misery and poverty of others. We ourselves never have to confront directly with those major issues. I do not think we have to apologize ourselves. We just have to be aware that we really are lucky sons of bitches. We just can thrive on the technological achievements of our ancestors, especially present-day’s extreme accessibility to everything through internet.

Gerwig, Baumbach & co shot this film very cheaply on the streets of New York. Nobody for example asked for wages, they all just took a percentage of the eventual profit. Its black-and-white is an ode to Woody Allen’s Manhattan, a big influence on the ideal romantic intellectual thinking of mumblecore. See also Baumbach’s genius The Squid and the Whale (2005) (produced by Wes Anderson) and his hilarious depiction of a hipster’s biggest fear to end up like, Greenberg (2010).

Watch out for these ones – New Mumblecore films in 2014:

These upcoming Mumblecore films of 2014, and a few up for release in 2015, will be reviewed as soon as they are released. 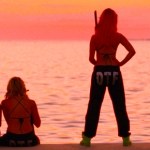 When hyperrealism gets real