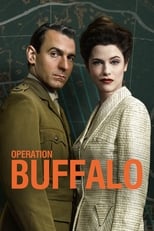 CreatorPeter DuncanCastEwen Leslie, Jessica De Gouw & James CromwellNetwork ABC Air Date May 31st, 2020 A captivating drama set in Maralinga, South Australia, at the height of the Cold War. At a remote army base carrying out British nuclear testing, paranoia runs rife and nuclear bombs are not the only things being tested, as loyalty, love, and betrayal are pitted against each other.

Where can you stream Operation Buffalo? DVD/Bluray via Amazon