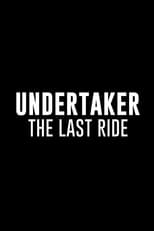 CreatorVince McMahonCastMark William Calaway, & Network WWE Network Air Date May 10th, 2020 The anticipated WWE Network docuseries will look back on The Undertaker’s storied career and place a focus on the ongoing challenge the legend appears to have coming to grips with a career beginning to near its end.

Where can you stream Undertaker: The Last Ride? DVD/Bluray via Amazon

Netflix
Stay up to date with the streaming options of Undertaker: The Last Ride & other streaming releases