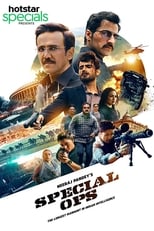 CreatorNeeraj PandeyCastKay Kay Menon, Karan Ashar & Devas DixitNetwork Disney+ Hotstar Air Date Mar 17th, 2020 The series follows Himmat Singh of Research and Analysis Wing who draws similar patterns in terrorist attacks and is convinced a single person is behind all the attacks. His task force team of five agents living in various parts of the world aim to catch the mastermind. The story is based on an inspiration taken from nineteen years worth of national significant events.

Where can you stream Special OPS? DVD/Bluray via Amazon