Heirs of the Night 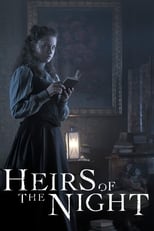 CreatorDiederik Van RooijenCastAnastasia Martin, Ulrik William Græsli & Aisling SharkeyNetwork ZDF Air Date Jan 11th, 2020 1889: the five remaining vampire clans in Europe are training to survive. In their midst is 14-year-old Alisa who has the power to choose between eternal life as a vampire or for all vampires to live as humans.

Where can you stream Heirs of the Night? DVD/Bluray via Amazon

On 2020-01-11 Sci-Fi & Fantasy/Family TV Series Heirs of the Night first aired on ZDF. Written and created by Diederik Van Rooijen, and produced by Lemming Film, Heirs of the Night will return and was last broadcasted on 2020-04-11.
IMDb Rating: /10 Heirs of the Night Official page on ZDFAll Seasons: 2 All Episodes: 26 Average Episode length: 25 minutes Seasons Season 1 - 2020-01-11 with 13 Episodes
Solar Opposites
Disney Gallery: The Mandalorian
We use cookies to ensure that we give you the best experience on our website. If you continue to use this site we will assume that you are happy with it.Ok