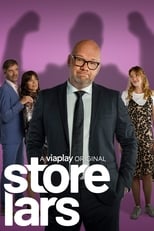 CreatorLars HjortshøjCastLars Hjortshøj, Julie Agnete Vang & Ellen HillingsøNetwork TV3 Air Date Apr 23rd, 2020 Get ready to get to know 'Big Lars' - because Lars Hjortshøj is tired of being 'Little Lars'. Tired of kind of silly roles with a stupid beard, tired of murky jobs, tired of being a man that has stalled in his midlife and never gotten the respect, he deserves. Because of that Lars ventures into a range of projects in his try to achieve real acknowledgement.

Where can you stream Big Lars? DVD/Bluray via Amazon