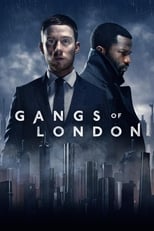 CreatorGareth EvansNetwork Sky Atlantic Air Date Apr 23rd, 2020 When the head of a criminal organisation, Finn Wallace is assassinated, the sudden power vacuum his death creates threatens the fragile peace between the intricate web of gangs operating on the streets of the city. Now it’s up to the grieving, volatile and impulsive Sean Wallace to restore control and find those responsible for killing his father.

Where can you stream Gangs of London? DVD/Bluray via Amazon

On 2020-04-23 Drama/Crime TV Series Gangs of London first aired on Sky Atlantic. Written and created by Gareth Evans & Matt Flannery, and produced by Sister Pictures & Pulse Films, Gangs of London will return and was last broadcasted on 2020-04-23.
IMDb Rating: /10 Gangs of London Official page on Sky AtlanticAll Seasons: 1 All Episodes: 9 Average Episode length: 55 minutes Seasons Season 1 - 2020-04-23 with 9 Episodes
Defending Jacob
I Know This Much Is True
We use cookies to ensure that we give you the best experience on our website. If you continue to use this site we will assume that you are happy with it.Ok