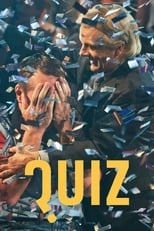 CastMatthew Macfadyen, Sian Clifford, Mark Bonnar, Michael SheenNetwork ITV Air Date Apr 13th, 2020 The story of Charles Ingram, a former British army major who caused a major scandal in the early 2000s after being caught cheating his way to winning £1 million on the game show Who Wants To Be A Millionaire? Ingram, his wife Diana and an accomplice, Tecwen Whittock, who was sitting in the audience, initially pulled off the on-screen heist before being caught and standing trial.

Where can you stream Quiz?