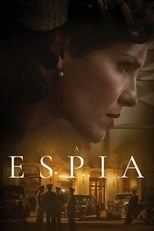 CreatorJorge Paixão da CostaCastDaniela Ruah, Maria João Bastos & Diogo MorgadoNetwork RTP1 Air Date Apr 8th, 2020 During the Second World War, several spy networks operated in Portugal. "A Espia" accompanies one of these networks, known as Shell. Directed by the British who operated in Portugal between 1941 and 1942, it had a plan to destroy infrastructures and act as a counterintelligence unit in case the country was invaded by the Germans.

Where can you stream The Spy? DVD/Bluray via Amazon