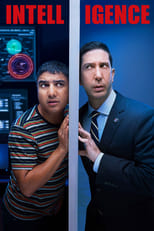 CreatorNick MohammedCastDavid Schwimmer, Nick Mohammed & Jane StannessNetwork Sky One Air Date Feb 21st, 2020 When an arrogant, maverick National Security Agent comes over from the US to join a newly-formed team tackling cybercrime at Britain's security headquarters, he enlists an inept and tactless computer analyst Joseph in a power grab that threatens to disrupt the team’s ability to combat cyber terrorism.

Where can you stream Intelligence? DVD/Bluray via Amazon

On 2020-02-21 Comedy TV Series Intelligence first aired on Sky One. Written and created by Nick Mohammed, and produced by Expectation Entertainment & Dark Harbor Stories, Intelligence will return and was last broadcasted on 2020-03-06.
IMDb Rating: 6.0/10 Intelligence Official page on Sky OneAll Seasons: 1 All Episodes: 6 Average Episode length: 23 minutes Seasons Season 1 - 2020-02-20 with 6 Episodes
Gentefied
Slow Burn
We use cookies to ensure that we give you the best experience on our website. If you continue to use this site we will assume that you are happy with it.Ok