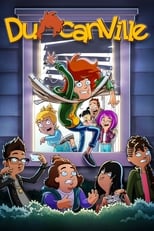 CreatorMike ScullyCastAmy Poehler, Riki Lindhome & Ty BurrellNetwork FOX Air Date Feb 16th, 2020 The series centers on the life of Duncan, a spectacularly average 15-year-old boy, his family and friends. Poehler will provide the voice of Duncan and his high-strung mom, Annie, who is constantly trying to prevent her son from ruining his life.

Where can you stream Duncanville?