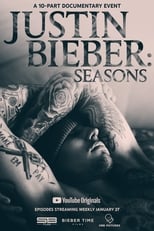 CastJustin Bieber, & Network YouTube Premium Air Date Jan 27th, 2020 The series will feature a behind-the-scenes look at Bieber's private life, including never-before-seen footage of his wedding to Hailey Bieber and his day-to-day alongside those in his inner circle.

Where can you stream Justin Bieber: Seasons? DVD/Bluray via Amazon

On 2020-01-27 Documentary TV Series Justin Bieber: Seasons first aired on YouTube Premium. Written and created by , and produced by Bieber Time Films & Scooter Braun Films, Justin Bieber: Seasons will return and was last broadcasted on 2020-02-10.
IMDb Rating: N/A/10 Justin Bieber: Seasons Official page on YouTube PremiumAll Seasons: 1 All Episodes: 7 Average Episode length: minutes Seasons Season 1 - 2020-01-27 with 7 Episodes
¿Quién quiere ser millonario?
XX
We use cookies to ensure that we give you the best experience on our website. If you continue to use this site we will assume that you are happy with it.Ok