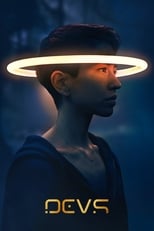 CreatorAlex GarlandCastSonoya Mizuno, Nick Offerman & Alison PillNetwork FX Air Date Mar 5th, 2020 Young computer engineer Lily Chan investigates the secretive development division of her employer, a cutting-edge tech company based in San Francisco, which she believes is behind the murder of her boyfriend.

Where can you stream Devs? DVD/Bluray via Amazon

On 2020-03-05 Drama/Sci-Fi & Fantasy TV Series Devs first aired on FX. Written and created by Alex Garland, and produced by FX Productions & Scott Rudin Productions, .
IMDb Rating: /10 Devs Official page on FXAll Seasons: 1 All Episodes: 1 Average Episode length: minutes Seasons Season 1 - 2020-03-05 with 1 Episodes
The Untamed
Awkwafina is Nora From Queens
We use cookies to ensure that we give you the best experience on our website. If you continue to use this site we will assume that you are happy with it.Ok