Diary of a Future President 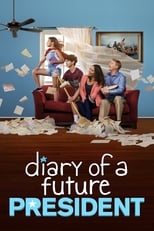 CastTess Romero, Charlie Bushnell & Selenis LeyvaNetwork Disney+ Air Date Jan 17th, 2020 Told from the narration of her diary, 12-year-old Cuban-American Elena navigates the ups and downs of middle school and begins her journey to become the future president of the United States.

Where can you stream Diary of a Future President? DVD/Bluray via Amazon