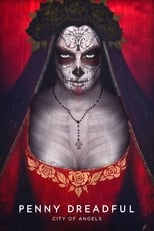 CreatorJohn LoganCastDaniel Zovatto, Jessica Garza & Johnathan NievesNetwork Showtime Air Date Apr 26th, 2020 Rooted in the conflict between characters connected to the deity Santa Muerte and others allied with the Devil, this new saga explores an exciting mix of the supernatural and the combustible reality of 1938 Los Angeles, a time and place deeply infused with Mexican-American folklore and social tension.

Where can you stream Penny Dreadful: City of Angels? DVD/Bluray via Amazon

Netflix
Stay up to date with the steaming options of Penny Dreadful: City of Angels & other streaming releases

On 2020-04-26 Drama TV Series Penny Dreadful: City of Angels first aired on Showtime. Written and created by John Logan, and produced by Desert Wolf Productions, .
IMDb Rating: /10 Penny Dreadful: City of Angels Official page on ShowtimeAll Seasons: 1 All Episodes: 6 Average Episode length: 60 minutes Seasons Season 1 - 2020-04-26 with 6 Episodes
The Plot Against America
Ratched
We use cookies to ensure that we give you the best experience on our website. If you continue to use this site we will assume that you are happy with it.Ok