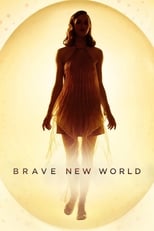 CreatorDavid WienerCastAlden Ehrenreich, Jessica Brown Findlay & Harry LloydNetwork Peacock Air Date Dec 31st, 2020 In a world without poverty, war or disease humans are given mind-altering drugs; free sex and rampant consumerism are the order of the day; and people no longer reproduce but are genetically engineered in "hatcheries." Those who won't conform are forced onto "reservations" - until one of these "savages" challenges the system, threatening the entire social order.

Where can you stream Brave New World? DVD/Bluray via Amazon