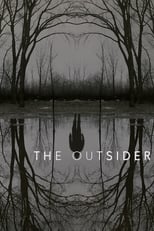 CreatorRichard PriceCastBen Mendelsohn, Cynthia Erivo & Bill CampNetwork HBO Air Date Jan 12th, 2020 When an insidious supernatural force edges its way into a seemingly straightforward investigation into the gruesome murder of a young boy, it leads a seasoned cop and an unorthodox investigator to question everything they believe in.

Where can you stream The Outsider? DVD/Bluray via Amazon

On 2020-01-12 Mystery/Drama TV Series The Outsider first aired on HBO. Written and created by Richard Price, and produced by Aggregate Films & Temple Hill Entertainment, The Outsider will return and was last broadcasted on 2020-01-12.
IMDb Rating: N/A/10 The Outsider Official page on HBOAll Seasons: 1 All Episodes: 10 Average Episode length: 60 minutes Seasons Season 1 - 2020-01-12 with 10 Episodes
Le Bazar de la Charité
99 envies d’évasion – Mexico, Nouvelles-Orléans, Paris
We use cookies to ensure that we give you the best experience on our website. If you continue to use this site we will assume that you are happy with it.Ok