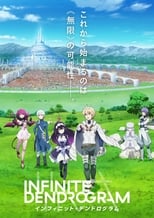 CastYuko Ono, Souma Saitou & Yuuki TakadaNetwork AT-X Air Date Jan 9th, 2020 In the year 2043, Infinite Dendrogram, the world's first successful full-dive VRMMO was released. In addition to its ability to perfectly simulate the five senses, along with its many other amazing features, the game promised to offer players a world full of infinite possibilities. Nearly two years later, soon-to-be college freshman, Reiji Mukudori, is finally able to buy a copy of the game and...

Where can you stream Infinite Dendrogram?

On 2020-01-09 Animation/Action & Adventure TV Series Infinite Dendrogram first aired on AT-X. Written and created by , and produced by NAZ, Infinite Dendrogram has ended and last broadcasted on 2020-04-16.
IMDb Rating: /10 Infinite Dendrogram Official page on AT-XAll Seasons: 1 All Episodes: 13 Average Episode length: 24 minutes Seasons Season 1 - 2020-01-09 with 13 Episodes
Somali and the Forest Spirit
Asteroid in Love
We use cookies to ensure that we give you the best experience on our website. If you continue to use this site we will assume that you are happy with it.Ok