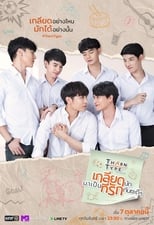 CreatorMAMECastKanawut Traipipattanapong, Natthad Kunakornkiat & Kokliang Parinya AngsananNetwork LINE TV Air Date Oct 7th, 2019 Type is a dark, tall and handsome freshmen. Although he’s a warm boy, he is homophobic because he was molested by a man as a child. His life turns up side down when the new year of college brings along a very interesting person in his life, a gay roommate, Than. Than, is a very handsome music major with fair skin and mixed features. He is also openly gay. With a gay guy and a guy who hates gay...

Where can you stream TharnType: The Series? DVD/Bluray via Amazon

Netflix
Stay up to date with the streaming options of TharnType: The Series & other streaming releases