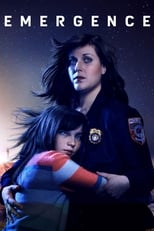 CreatorTara ButtersCastAllison Tolman, Alexa Swinton, Owain Yeoman, Ashley AufderheideNetwork ABC Air Date Sep 24th, 2019 A police chief takes in a young child she finds near the site of a mysterious accident who has no memory of what has happened. The investigation draws her into a conspiracy larger than she ever imagined, and the child’s identity is at the center of it all.

Where can you stream Emergence?