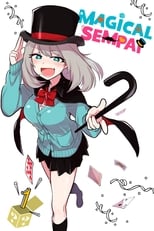 CastKaede Hondo, Aoi Ichikawa & Daisuke NamikawaNetwork Tokyo MX Air Date Jul 2nd, 2019 Our MC finds out that his school requires him to join a club and during his reluctant search he stumbles upon Tejina-senpai attempting magic tricks in her clubroom. Tejina-senpai has massive stage fright however and so now that she has an audience her attempts are simply comedic.

Where can you stream Magical Sempai? DVD/Bluray via Amazon

On 2019-07-02 Animation/Comedy TV Series Magical Sempai first aired on Tokyo MX. Written and created by , and produced by Lidenfilms, Magical Sempai has ended and last broadcasted on 2019-09-17.
IMDb Rating: /10 Magical Sempai Official page on Tokyo MXAll Seasons: 1 All Episodes: 12 Average Episode length: 15 minutes Seasons Season 1 - 2019-07-02 with 12 Episodes
How Heavy Are the Dumbbells You Lift?
To the Abandoned Sacred Beasts