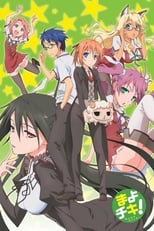 CreatorHajime AsanoCastYuka Iguchi, Satoshi Hino, Eri Kitamura, Caitlynn FrenchNetwork MBS Air Date Jul 7th, 2011 When you've got acute gynophobia, even a pretty girl can be like a malady, and as the sparring partner for his family of female wrestlers, Sakamachi Kinjiro has the worst case ever! Just one touch makes his nose bleed, so school's a bloody nightmare even before Kanade, the principal's twisted daughter, deduces both Kinjiro's "feminine issue" and that his name contains the sounds "Chi" and "Kin"...

Where can you stream Mayo Chiki!? DVD/Bluray via Amazon

Netflix
Stay up to date with the streaming options of Mayo Chiki! & other streaming releases