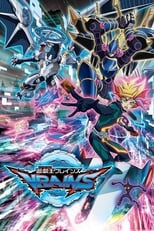 CreatorCameron SharpCastShouya Ishige, Shunsuke Takeuchi & Yuki NakashimaNetwork TV Tokyo Air Date May 10th, 2017 Den City is a city with advanced network systems in which a VR space called LINK VRAINS was created by SOL Technologies. The Knights of Hanoi, a group that hacks through dueling, as well as SOL Technologies are seeking a mysterious AI program. Yusaku Fujiki, also known as Playmaker, is a first year high school student who manages to capture this AI program while trying to find out the truth about...

Where can you stream Yu-Gi-Oh! VRAINS? DVD/Bluray via Amazon

Netflix
Stay up to date with the streaming options of Yu-Gi-Oh! VRAINS & other streaming releases