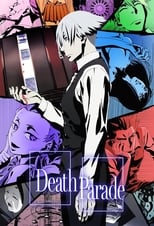 CreatorYuzuru TachikawaCastJamie Marchi, Tomoaki Maeno, Anastasia Munoz, Alex OrganNetwork Nippon TV Air Date Jan 10th, 2015 There is a place after death that’s neither heaven nor hell. A bar that serves you one chance to win. You cannot leave until the game is over, and when it is, your life may be too. From Studio Madhouse (Death Note, Black Lagoon) comes a thrilling new series where the stakes are high and the rules are simple: your life is on the line.

Where can you stream Death Parade?