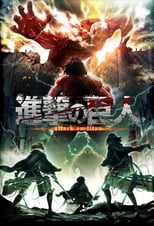 CreatorYasuko KobayashiCastYûki Kaji, Marina Inoue, Yui Ishikawa, Josh GrelleNetwork MBS Air Date Apr 6th, 2013 Several hundred years ago, humans were nearly exterminated by Titans. Titans are typically several stories tall, seem to have no intelligence, devour human beings and, worst of all, seem to do it for the pleasure rather than as a food source. A small percentage of humanity survived by walling themselves in a city protected by extremely high walls, even taller than the biggest Titans. Flash forward...

Where can you stream Attack on Titan?