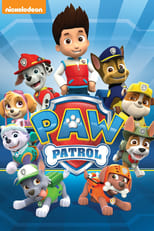 CreatorKeith ChapmanCastDevan Cohen, & Network Nickelodeon Air Date Aug 12th, 2013 A group of six rescue dogs, led by a tech-savvy boy named Ryder, has adventures in "PAW Patrol." The heroic pups, who believe "no job is too big, no pup is too small," work together to protect the community. Among the members of the group are firedog Marshall, police pup Chase, and fearless Skye. All of the animals have special skills, gadgets and vehicles that help them on their rescue missions....

Where can you stream Paw Patrol?