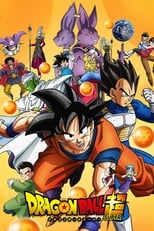 CreatorAkira ToriyamaCastMasako Nozawa, Takeshi Kusao & Ryou HorikawaNetwork Fuji TV Air Date Jul 5th, 2015 Set just after the events of the Buu Saga of Dragon Ball Z, a deadly threat awakens once more. People lived in peace without knowing who the true heroes were during the devastating battle against Majin Buu. The powerful Dragon Balls have prevented any permanent damage, and our heroes also continue to live a normal life. In the far reaches of the universe, however, a powerful being awakens early...

Where can you stream Dragon Ball Super? DVD/Bluray via Amazon

On 2015-07-05 Animation/Mystery TV Series Dragon Ball Super first aired on Fuji TV. Written and created by Akira Toriyama, and produced by Toei Company, Ltd. & Toei Animation, Dragon Ball Super has ended and last broadcasted on 2018-03-25.
IMDb Rating: 8.4/10 Dragon Ball Super Official page on Fuji TVAll Seasons: 1 All Episodes: 131 Average Episode length: 24 minutes Seasons Season 1 - 2015-07-05 with 131 Episodes
Law & Order
Bob’s Burgers
We use cookies to ensure that we give you the best experience on our website. If you continue to use this site we will assume that you are happy with it.Ok