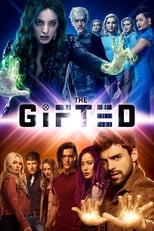 CreatorMatt NixCastStephen Moyer, Amy Acker & Natalie Alyn LindNetwork FOX Air Date Oct 2nd, 2017 A suburban couple's ordinary lives are rocked by the sudden discovery that their children possess mutant powers. Forced to go on the run from a hostile government, the family joins up with an underground network of mutants and must fight to survive.

Where can you stream The Gifted?

On 2017-10-02 Action & Adventure/Drama TV Series The Gifted first aired on FOX. Written and created by Matt Nix, and produced by Walt Disney Television & 20th Century Fox Television, .
IMDb Rating: 7.3/10 The Gifted Official page on FOXAll Seasons: 2 All Episodes: 29 Average Episode length: 45 minutes Seasons Season 1 - 2017-10-02 with 13 EpisodesSeason 2 - 2018-09-25 with 16 Episodes
Strike Back
Hunter x Hunter
We use cookies to ensure that we give you the best experience on our website. If you continue to use this site we will assume that you are happy with it.Ok