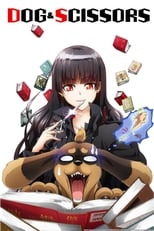 Creator更伊俊介Cast樱井孝宏, 伊藤静 & 井上麻里奈Network AT-X Air Date Jul 1st, 2013 A nonsense comical mystery. Harumi Kazuhito is a high school boy who loves books and is a fan of novelist Natsuno Kirihime. One day, he finds Kirihime writing at a cafe, about to be shot by a robber. He protects her from the attack but is killed instead. Through the supernatural power of a book-worm, he is reincarnated as a dachshund dog. Kazuhito (as a dog) writhes in a painful bookless life,...

Where can you stream Dog & Scissors? DVD/Bluray via Amazon