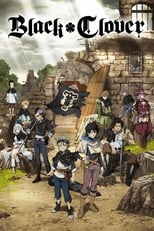 CreatorTatsuya YoshiharaCastGakuto Kajiwara, Nobunaga Shimazaki & Kana YuukiNetwork TV Tokyo Air Date Oct 3rd, 2017 Asta and Yuno were abandoned together at the same church, and have been inseparable since. As children, they promised that they would compete against each other to see who would become the next Emperor Magus. However, as they grew up, some differences between them became plain. Yuno was a genius with magic, with amazing power and control, while Asta could not use magic at all, and tried to make up...

Where can you stream Black Clover?